Houston’s Most Loving Volunteers: How RSVP Is Changing Lives 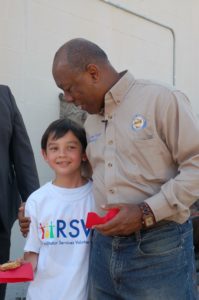 Rehabilitation Services Volunteer Project, or RSVP, is not your average volunteer group. It is a group of resilient people who, despite having full time jobs, are dedicated and fully committed to distributing to underprivileged and disabled Houstonians necessary medical supplies, such as gloves, catheters, diapers, and bed liners, and Durable Medical Equipment, or DME, such as wheelchairs, crutches, canes, walkers, and bathroom assistive devices. Every second Saturday of the month, RSVP and other related organizations like United Spinal Association of Houston and Joni and Friends get together to distribute thousands of these supplies, and this past Saturday was no exception, despite the hurdles created by the recent storm. In fact, this particular event got even more attention and more donations than usual. Mayor Sylvester Turner even made an appearance, and spoke with as many people as he could – volunteers and patients alike. He stated that, after Harvey, “we have to look at the long term, and we have to make sure no group is left out.”

When Harvey made landfall, volunteers across the board sprang into action. Rafferty Laredo, of United Spinal Association of Houston, posted on Facebook asking for donations of just a few wheelchairs. When he woke up the next morning, the post had gotten over 300 shares, volunteers were pouring in by the dozens, and hundreds of wheelchairs were being offered.

Many patients at the event were apprehensive at first – at least until approached by one of the beaming and ever-helpful volunteers. Keidra Paz, a resident of Spring, Texas, however, had attended several of RSVP’s Second Saturday donation drives, and was familiar with the process and with several volunteers. When asked how the donations affect her life, she smiled and responded, “I came here with a prayer, and this has been more than a miracle.” She first learned of the events from the Houston Center for Independent Living, which she also frequents. Others, like a woman named Melissa, whose son Kai tagged along, are first time attendees, and saw flyers for the Second Saturday drive at the West Gray Multi-Service Center.

The entire process of building the RSVP organization has been a “labor of love,” according to Savitha Bonthala of RSVP. The group started with only two storage sheds, and now is able to rent out both a warehouse space and half of an office building. They struggled with increasing rents, getting enough donations, and keeping their non-profit afloat, but giving up was not an option. “From that point to now, I’m blown away by the number of people that we’re able to help,” Bonthala remarked. She then explained that this Second Saturday was aimed towards helping people who have been relocated or displaced due to Harvey, and that disabled people often face additional hardships when in shelters, such as not having the necessary supplies or equipment they need to live, and developing pressure ulcers from the cots provided. Bonthala concluded, “I’m really honored to be a part of this organization and to see this come together.”

In the following weeks, the West Gray Multi-Service Center and the United Spinal Association of Houston will continue to distribute supplies to the George R. Brown Convention Center and NRG Stadium, which are both being utilized as shelters for people without homes due to Harvey. Laredo explained that after this particular Second Saturday event, RSVP and United Spinal Association of Houston would be working with FEMA, Red Cross, and other nonprofits to deliver the ongoing donations via trucks to those affected by Harvey who live outside of Houston, in places like Orange and Beaumont, Texas. Laredo also commented that those affected by Irma are on their minds, and they hold a special interest in supporting them in the future.

To refer a patient, volunteer, or for questions or more information, do not hesitate to contact us.

Your donation WILL have a direct impact.